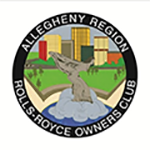 heny Region was an early on part of our RROC. With aging members and busy lives it became generally inactive in the 1960s. In 1978 the last Chairman of the Region Fred Jones began resurrecting the our Region following an article seen in the Pittsburgh Post-Gazette about a local member. Following that contact the Allegheny Lady began a new life, events were planned and well received. The membership began growing to the 70 or 80 members of the Allegheny Region today.

The Allegheny Region reaches from the Headquarters Region, Mechanicsburg/Harrisburg, to the Ohio Region and south to include West Virginia, Eastern Kentucky and Tennessee. It is diverse in membership with Rolls-Royce and Bentley models covering the entire range of production.

The Allegheny Region publishes the Allegheny Lady to keep our members informed of upcoming events as well as reporting the enjoyment of recent events. It participates in local car shows, and charitable events. The Region sponsors technical sessions, Spring and Fall Tours as well as being an integral part of the Pittsburgh Vintage Grand Prix. It joins with the local Classic Car Club of America to support the old car hobby and encourage new members and encourage everyone to be involved. In 2014 the Allegheny Regon conducted the well received Annual Meet at Seven Springs. Visit the Allegheny Region Website